What Are HVLS Fans? 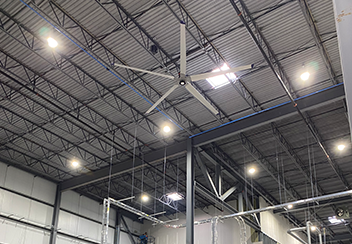 HVLS is an acronym for High Volume Low Speed fans. These are also commonly referred to as Large Diameter Ceiling Fans (or LDCFs). As both names indicate, these fans are installed in the ceiling of large buildings and spin at slow rotational speeds. However, with any long rotor, the tip speed of a 12’ long fan blade is anything but slow, so the industry is moving away from HVLS and towards the LDCF name.

Most HVLS/LDCF manufacturers design fans from 8’ to 24’ in diameter. Anything smaller than 8’ tends to require higher rotational speeds to qualify for this classification of fans. Fans above and beyond 24’ in diameter would require significant design changes that would also reclassify the fan.

"HVLS is an acronym for High Volume Low Speed fans. These are also commonly referred to as Large Diameter Ceiling Fans (or LDCFs). "

HVLS/LDCF fans are energy efficient and capable of covering upwards of 20,000 square feet with one fan. They are utilized in applications such as hangars, gymnasiums, distribution centers, manufacturing buildings, shopping malls, transit hubs, commercial stores and even large residential spaces.

Since 2007, Dean has sold, serviced and installed HVLS projects in countless applications on every continent around the world.  His experience and knowledge are key components to the continued success our sales and distribution partners.
Back All Articles Next